As the European EV market starts to take-off, Europe and China are the focus of a raft of major EV joint ventures

North American and European auto-giants are forging key alliances as they drive their electric vehicle (EV) strategies forward into the 2020s.  Arguably the largest of the recent announcements is Ford and Volkswagen's multi-billion dollar deal to jointly develop EVs and self-driving vehicles globally.  From a technical perspective, Ford may be the greater beneficiary as it will be the first non-VW Group manufacturer to gain access to VW's MEB platform. This is set to form the backbone of the German carmaker's EVs across all of its brand ranges including Audi, SEAT, Skoda and others.  Ford revealed plans to deliver 600,000 EV cars to Europe based on the VW platform in a single model, with a second vehicle already on the drawing board.

Financially, the benefits are potentially more balanced. Ford had previously announced an $11.5bn global EV investment, while VW had originally committed $7bn to the MEB platform, adding a further $3.1bn to this latest joint venture.  According to bosses from both companies, the alliance could save hundreds of millions of dollars in development and parts costs, with VW also estimating it could gain as much as $20bn in revenue through sharing its MEB platform with Ford in Europe.  However, both companies were coy when it came to stating how soon they would start to see returns on their investment. 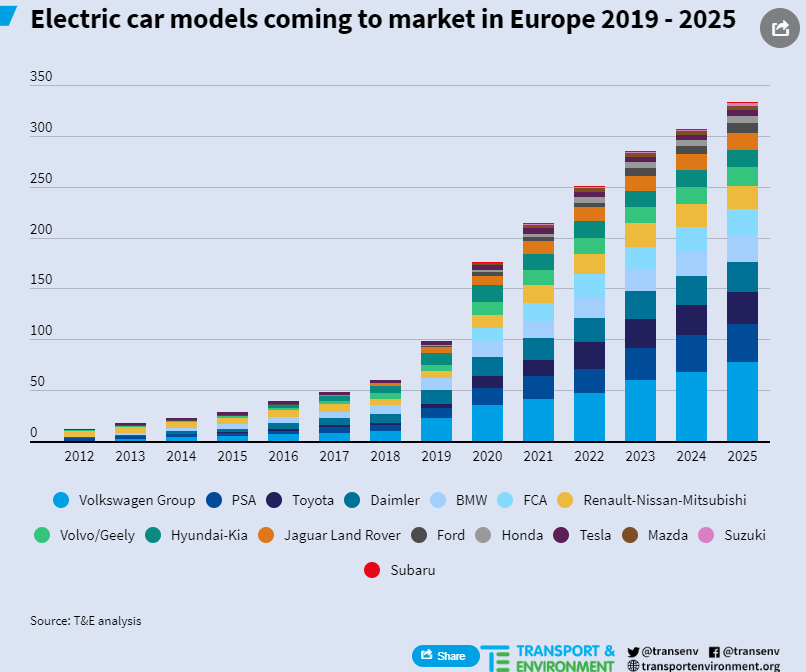 The venture certainly comes at the right time for the European market. According to the latest figures from analysts Transport & Environment, the next two years are likely to see EVs become mainstream.  After around seven years of slow growth, based predominantly on early-adopter sales of mainly Renault, PSA and VW Group vehicles - Tesla registers but with very low volumes - 2019 is already showing a rapid acceleration of sales.

According the report, 2020/2021 are set for a significant jump in the EV market as existing manufacturers boost their range and new players, such as Jaguar Land Rover and Volvo/Geely, enter the fray. In all, EV production is expected to grow six-fold from now until 2025, equating to more than four million cars and vans, or one fifth of total EU car production. The report also states that both battery supply will be sufficient to meet this demand and that the forecasts would mean the auto industry would be able to comply with EU C02 targets for 2025.

Meanwhile, China is also a focus for recent EV joint venture activity. Following an initial agreement at the end of 2018, Renault Group cemented its joint venture with Jiangling Motors Corporation (JMCG) to become a 50% stakeholder in the Chinese companies EV arm, JMEV. The deal, worth $145m will see Renault expand its presence in the Chinese market. JMCG currently sells around 400,000 vehicles across China and the latest venture is likely to provide a significant boost to the Chinese manufacturer.  According to Renault Group Senior Vice President, Francois Provost: "China is a key market for Groupe Renault.  The partnership in electric vehicle business with JMCG will support our growth plan in China and our EV capabilities. As a poineer and leader in the European EV market since 10 years, we will capitalize on our experience in EV R&D, production, sales and services."

Toyota also revealed plans to co-develop sedans and "low-floor SUVs" with Chinese battery maker BYD.  The new vehicles are set to appear on the Chinese market in the first half of the next decade, with both companies involved in battery development for the vehicles. BYD was the first company worldwide to sell plug-in hybrid vehicles more than 10 years ago and the venture is likely to secure Toyota's supply of batteries and other core EV components.

And Canada's auto components giant, Magna, has agreed a deal with China's BIAC Group and the Zhenjiang regional Government to manufacture EVs.  Although no financials were revealed, the framework agreement is expected to be sealed in Q4 2019 subject to approvals.  It will be the first investment by Magna in a complete vehicle manufacturing facility outside Europe. The expected capacity is 180,000 vehicles per year, with the first ARCFOX models likely to launch towards the end of 2020.

And finally, Indonesia is set to begin EV production in 2022, according to the country's Industry Ministry.  Rich in nickel laterite ore, used in the production of lithium batteries, Indonesia is already talking to Toyota and Hyundai about the development of EV production plants. Indonesia as the second-largest car production hub in Southeast Asia.